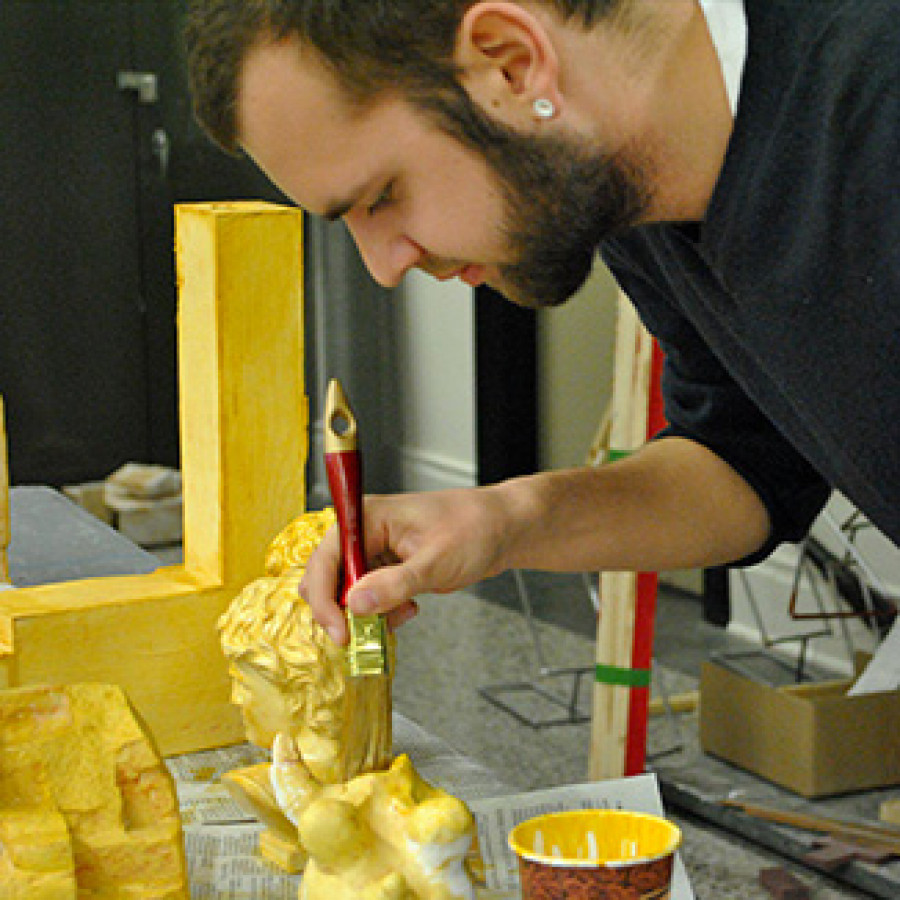 Alexandre Pépin lives and works in Montréal. He earned a Bachelor’s in Studio Arts from Concordia University.

He paints groupings of imaginary objects at once evoking the toy-medium of modelling clay, and reminiscent of the vanitas pictorial genre, featuring allegorical representations of death and the passage of time. He also expresses the vanitas sense of emptiness of human passions and activities, through the accumulation of objects that we believe to own.

In 2017, he was the recipient of a research, creation and exploration grant from the Conseil des arts et des lettres du Québec, for his first artistic research residency at Vermont Studio Center.

His work was exhibited at Galerie Marc Gosselin for his first solo exhibition, Les Corps Fongiques, then at other venues in Montréal, including ARTGANG gallery, Galerie B-312, Art POP festival, and Eastern Bloc, in the context of group exhibitions.

He is also co-founder of the radio show, Les Étangs D’art, broadcast by CISM 89.3 FM, mandated to promote, demystify and validate the visual arts in Montréal.

Reflective of painting and modelling clay, my work represents a mould for an imaginary world that is constantly in flux. It is an infinite source of stories that emerge and untangle in matter, based on the roots of all creation: learning the very notion of how to play.

I favour modelling clay and paint, two media that are very similar in their colourful, malleable, reflective and representative essence. Through compositions that are playful, ironic and hyperrealistic, I confer on them the possibility of bringing together ambiguous objects, which are at once beautiful and dangerous, intriguing and preoccupying – much like unknown or strange life forms.

I am interested in the commercial context of painting, and in the aesthetic, symbolic and monetary value of objects, and in the appearance of objects represented on the canvas. My work therefore rejects light and colour, the fundamental components of painting used as cosmetic tools to increase or decrease the value of objects. Painted objects are living lies: they don’t exist.

I create groupings of imaginary objects that remind us both of the toy-like medium of modelling clay, and of the vanitas pictorial genre. Vanitas painting features allegorical representations of death, the passage of time, and of the emptiness of human passions and activities, by disrupting objects that would’ve served to construct the identity of an individual. Taking on a visceral appearance, organic and “phytomorphically” virulent characteristics, and portraying grotesque figures at times reminiscent of carcasses, through their nature that is at once repulsive and intriguing, these forms alienate luxury objects, by making their commercial function seem strange.

To summarize, I construct imaginary worlds, hyperrealistic abstractions, still lifes influenced by material culture and the value that we attribute to objects that ensue from it.

These are cabinets, gardens, altars, vivariums, and stuffed landscapes,

In which artwork swims to occupy lonely shapes.

These are fragmented bodies,

for the pleasure of deprived bodies.
Scroll to Top